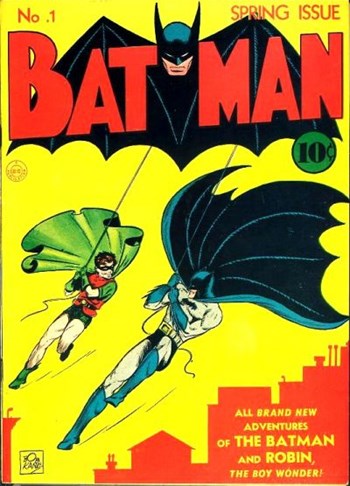 The background inks credit was verified by Robinson. 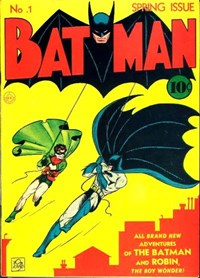 2 The Legend of the Batman--Who He Is and How He Came To Be! (Batman) Comic story, 2 pages

Bruce Wayne's parent are murdered by a cheap crook, and young Bruce vows to avenge their deaths by warring on all criminals.

Synopsis added by Craig Delich on 2008-10-30. The background inks and letters credits were verified by Moldoff.

Batman faces a new criminal who succeeds in killing famous men and stealing their prized possessions, leaving them all with "a smile" on their face!

First line: "Once again a master criminal stalks the city streets -- a criminal weaving a web of death about him..." There is an earlier chronological appearance (and origin) of the Joker in Detective Comics #168. Synopsis added by Craig Delich on 2008-10-30. Robinson verified with Gary Watson in July 2009 that he did some penciling (including the Joker's card on the splash page specifically), in addition to the background inks and lettering he already confirmed.

Having bought the Bar Q Ranch, Major Bigsbe decides to celebrate by shootin' off his pistols...and lands in jail!

The Batman faces an arch criminal who has invented a serum to create a race of giant monsters, and nearly becomes one of them himself!

First line: "While an innocent metropolis sleeps little does it realize that huge, terrifying man-monsters shall soon stalk the streets..." This story was originally prepared for Detective Comics #38, but with the introduction of Robin in that issue, the story [sans Robin] was published here. Oddity: Machine guns are mounted on the Batplane, which are used to kill. Synopsis added by Craig Delich on 2008-10-30. The background inks and letters credits were verified by Robinson.

Detective Terry Gallant proves to his Chief that the late Barton Barlow had killed himself with a gun in a most mysterious way.

Batman and Robin take a trip aboard an exclusive yacht in order to prevent the theft of the Travers necklace at the hands of the Cat!

First line: "Among the guests walks a young steward..." The Cat was later renamed Cat-Woman or Catwoman in next issue; earlier chronological appearance was in issue #52 and in Brave and the Bold #197. Synopsis added by Craig Delich on 2008-10-30. The background inks and letters credits were verified by Robinson.

Inventor Doctor Synce gets Navy flier Wayne to fly secret plans from Pensacola, Florida to the coast, when the pilot runs up against an old adversary and ace from years before.

Uncle Zep takes Ginger to the soda shop for a soda, but ends up drinking way too many himself!

12 "In Egypt they say "How are you sweating"? instead of "How is your health"?" (Fantastic Facts) Comic story, 1 page

The Joker escapes from prison to continue his rampage of death and to steal the famed Cleopatra necklace and Fire Ruby.

First line: "Once again that harlequin of hate..the Joker..brings grinning death to a terrified people..." As recounted in various sources, the Joker was supposed to die of his stab wound at the end of the story, but the editors decided this villain was too good to kill off, so the last panels were re-drawn to show him surviving. The last panel of the story, titled "Golden Rules for Robin's Regulars", introduces readers to "Robin's Code" of conduct. Synopsis added by Craig Delich on 2008-10-30. The background inks and letters credits were verified by Robinson.

Promotional ad for Detective Comics #40, whose cover is shown here.

Advertisement for making your own records at home, from Home Recording Company, New York, N.Y. Appears on the inside back cover.

Found on the back cover. Made to cut out and frame.