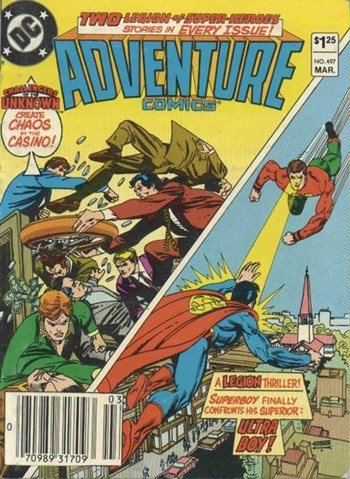 Lettering and coloring credits from Carl Gafford in a December 2010 e-mail. 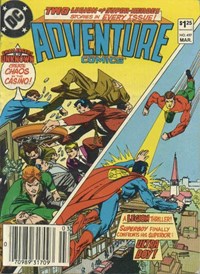 2 All Together Now! (Challengers of the Unknown) Comic story, 9 pages

Continued from last issue... The not-yet-Challengers investigate who sabotaged their plane... Red Ryan escorts an old friend, Johnny Green, in Las Vegas, when a car tries to run them down! Johnny explains HE was the target, not the heroes. Johnny won $300K from mobsters but hadn't collected. He was to fly to Vegas with Red. Mobsters planted a plastic sabotage device to crash the plane: plastic to fool metal detectors. The heroes meet the mobsters. A fight brings "Chaos in the Casino". Johnny gets paid and the mob goes to jail. And the heroes finally get their TV appearance as "Challengers of the Unknown!"

An original adventure that finishes their expanded origin from Showcase 6 and Challengers of the Unknown 31. More Challs stories were planned for Adventure Comics Digest, but they were bumped out by Legion reprints. The only finished unused story became part of DC Comics Presents 84.

Ultra Boy must discover Superboy's secret identity as an initiation test for the Legion.

Mera has been held captive by the same gangsters Aquaman has been fighting. After they escape, they head for Atlantis for the final showdown with Narkran.

The Marvel Family unite to battle the evil Black Adam.

6 The Face Behind the Lead Mask! (Tales of the Legion of Super-Heroes) Comic story, 12 pages

At a regular meeting of the Legion of Super-Heroes, the Legionnaires lose control of their powers. Urthlo arrives and announces that he now controls the Legionnaires' powers and there is nothing they can do about it. But Saturn Girl comes up with a serum to temporarily cure Mon-El and immunize him against lead, and Superboy releases him from the Phantom Zone to knock out Urthlo, who turns out to be an automaton created by Lex Luthor sent into the future to destroy the Legion.

7 Stop that Kid... Before He Wrecks the World! (Spectre) Comic story, 24 pages

An evil force invades the body of young Hamilton Benedict, giving him supernatural powers to battle the Spectre.

8 The Story Behind the Stories Text article, 1 page

Discussion of the Legion stories reprinted in the issue.