The Greatest 1950s Stories Ever Told 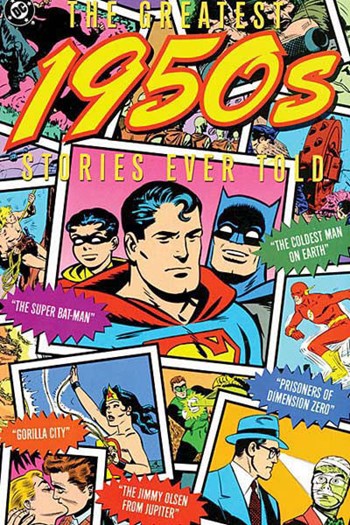 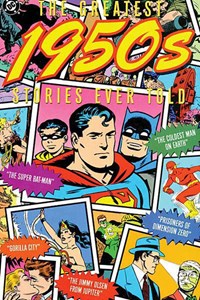 This table of contents includes a listing for a PSA featuring Peter Porkchops that is not in the book.

Mike Gold discusses the changes in pop culture in the 1950s and the challenges these changes posed for comics. Article is illustrated with several cover reproductions and includes a suggested reading list.

Joe Kubert reminisces about his friends and their comics work in the 1950s. Article is illustrated with with several cover reproductions.

Warden Elias Bramm uses his connections to the criminal element and his mastery of disguise to run guns to the Indians as Black Cougar. Tomahawk puts a stop to Black Cougar's operation, but doesn't discover his enemy's true identity.

John Jones discovers that Alex Dunster, who acquires and sells scientific and technical items of great value, has gotten hold of the machine that Prof. Erdel used to bring J'onn J'onzz from Mars. Jones realizes that if he uses the machine to return to Mars, however, Dunster would be free to continue his criminal ways. So Jones confronts Dunster, but Dunster destroys the machine before surrendering.

When Spike's father decides he can't eat a lobster, Spike gets to bring it home from the restaurant as a pet. Since baby animals can understand and speak baby talk, the lobster asks the kids to do him a favor, and they send him back to the sea.

Writing and inking uncredited on item.

When Green Arrow and Speedy investigate giant arrows falling from the sky, they find themselves pulled into another dimension when an arrow they are examining is retrieved.

Congo Bill and Janu are taken as captives to a village populated by intelligent gorilas, but discover they are not what they appear.

The ruling Septarch of the planet Lamia have chosen Earth as the place to exile their incorrigible criminals. But after the criminals steal a hydrogen bomb to fule their spacecraft in order to return to Lamia, Captain Comet tracks down the aliens and returns them to Lamia as prisoners.

14 The Riddle of the Crystal Ball! (Nighthawk) Comic story, 6.67 pages

Nighthawk poses as a fortune teller to trap a pair of outlaws.

Inking not credited on item. Letterer from index of original printing.

A flashback story that tells how when Steve Trevor bet Wonder Woman that he could always pick her out in any situation, she adopted the identity of Diana Prince and concealed herself right under his nose.

When Blackhawk appears to have been killed, the rest of the team must face the War Wheel, the Flying Tank and Killer Shark's octopus, all under the control of the Question Mark, without their leader. But Chuck realizes the Question Mark is Blackhawk in disguise, and Blackhawk reveals that his ruse was a test to see who could best lead the Blackhawks in his absence.

Writing not credited on item; Charles Cuidera credited for pencilling on item.

When the Fox tries to collect a $150 debt from the Crow, the Crow swindles the Fox out of another $150, which he hands back as payment in full.

When Lana brings authentic African artifacts from her father's collection for the Smallville High School Drama Club to use, she is accidentally pricked by a blow gun dart and falls asleep. Superboy must acquire the antidote within three days -- all the while convincing Prof. Lang that nothing is wrong with Lana -- or Lana will die.

20 The Sorceror of the Sea! (Aquaman) Comic story, 6 pages

When sorcerer Jason Deeter appears to be able to control Aquaman, maritime hijackers try to use Deeter to force Aquaman to help them commit crimes. But Aquaman puts down the thugs and reveals that Deeter is not a sorcerer at all and that he and Deeter came up with this ruse to smoke them out.

"I've got to watch these prisoners closely."

While watching prisoners, Casey breaks up a fight, but needs help identifying one of the men.

Identified in item as from January 1959.

Johnny Peril finds his friend Lee Allen, who just before he dies swears he has seen Subara the Ice Queen, who the natives believe lives on frozen Mt. Subara. Johnny returns to the mountain with two more friends, but only he encounters Subara. They refuse to believe he met the mythical woman until he produces her crown of roses.

When the reformed Harvey Dent tries to prevent a robbery, he is caught in an explosion and reverts to Two-Face. He embarks on a new crime spree, and Batman and Robin deduce that Two-Face is going after people who commonly show two faces to the world. At a ceremony making Bruce Wayne honorary chief of a local tribe, Batman and Robin are trapped by Two-Face and strapped to a giant coin. Two-Face flips the coin over a bed of spikes, and though the gimmick is rigged to land face down, the dynamic duo manages to create a magnetic field and flip the coin so that they land safely on top of the coin above the spikes.

When Merlin tries to bring Justin and Butch back to Camelot for a feast he accidentally sends them to the 35th century. There, they help prevent an attempt to overthrow democracy before Merlin brings them back to the past.

When three friends die in a plane crash, their spirits seem to be haunting those they left behind, but the Phantom Stranger reveals that the ghostly appearances are really the work of an embezzler attempting to cover his tracks.

When the Arroyo Gang kidnaps Sheriff Tane, Johnny Thunder thinks they must have killed his father, and tells the townsfolk that he is really Sheriff Tane's son. Johnny takes out the whole Arroyo Gang single-handedly and happily finds his father alive. But his secret identity remains safe, as everyone assumes he was only honoring Sheriff Tane by his earlier declaration.

Flash faces off against Captain Cold, who commits crimes by using a cold-gun to freeze things and create mirages. But once Flash figures out what Captain cold can do, he ignores the mirages and takes the villain in.

Nan has always gotten her big sister Nola's hand-me-downs, but when Nola's boyfriend Bob shows an interest in Nan, Nola insists Bob was only trying to make her jealous. When Nan discovers a wedding dress in Nola's room, she assumes Bob and Nola have plans to marry, but Bob tells Nan that Nola manipulated situations to make it look like he was in love with her and he declares his love for only her.

King Faraday, on the trail of a killer, rides the Orient Express, where he meets a movie starlet and a camera-happy tourist. Though two attempts are made on his life, he finds no clues as to the identity of the killer. Only when the photographer overplays his hand does Faraday realize he is behind the attacks and using his camera to transport pictures of a more sensitive nature than the candids he has been taking. Faraday puts a permanent end to the photographer in a fight atop the train.

Green Lantern travels to Venus to save a blue-skinned caveman-like race from attacks by yellow Pterodactyl-like creatures.

Without meaning to, Jimmy agrees to be a test subject for a week for a race of people from the planet Jupiter. As part of the experiment, he gains the ability to read people's minds, but he is also turned into a green, scaly Jovian. He uses his new abilities to compete for the Newsman of the Year award, though he wraps himself in bandages to cover his appearance. Between tracking down scoops, Jimmy casually reads Clark Kent's mind and "hears" Clark think that he is Superman. When his rival Vince Regan sees Jimmy without his bandages, he plans to expose him at the award ceremony. But luckily for Jimmy a Jovian week is equivalent to 5 Earth days, and when his bandages are removed at the ceremony Jimmy has reverted to his old self. Later, the Jovians declare their experiment a success and help Superman preserve his secret identity.

Pete misunderstands how a barometer works.

Noted in item as coming from January 1959.

38 The Secrets of the Sorceror's Box! (Challengers of the Unknown) Comic story, 24 pages

When four men walk away from a plane crash unharmed, they decide they are now living on borrowed time and vow to use that time challenging the unknown. In their first official case, they are asked by the sorcerer Morelian to open the four chambers of an ancient box. The Challs open the first three chambers, releasing a stone giant created and destroyed by pure thought, a sentient sun that freezes by consuming all nearby heat which Red traps in a vaccuum chamber, and a device that covers things in ribbons of plastic, but which can be controlled by the dial on its container. Before the Challs can open the fourth chamber, Morelian opens it and removes a diamond ring. He points out an inscription on the box which claims the box contains immortality, and takes off with his prize. But Morelian's plane immediately stalls and crashes. The Challs decide that immortality was contained in the box itself, not its contents.

Writing credited to Dave Wood only in item.

Robert Greenberger discusses the major events at DC Comics during the 1950s, including the publishing of some significant comics not included in this volume. Article is illustrated with with several cover reproductions.