Batman: The Strange Deaths of Batman 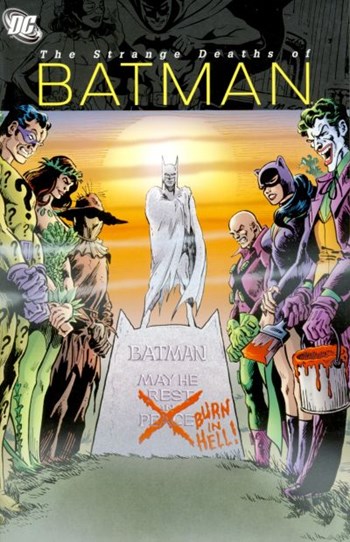 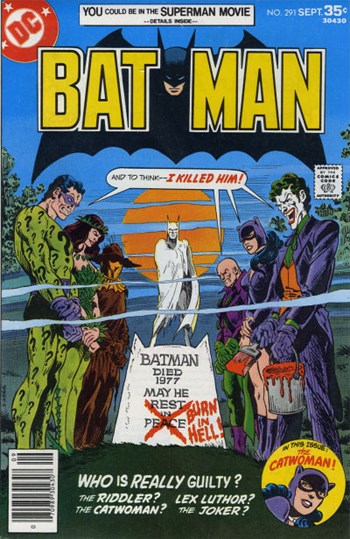 The illustration behind the title is a panel from Nightwing (DC, 1996 series) #52. 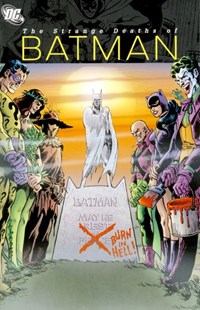 Batman and Robin put an end to the crime spree of the Bouncer by taking away his costume's properties of elasticity. But writer Gardner Fox wonders how the story would have turned out differently if Batman had been killed by the Bouncer and Robin had had to come up with a way to neutralize the Bouncer's abilities.

After the Automator kills the Batman, Robin devotes the next ten years of his life to hunting down the killer. When the thief dubbed Golden Gloves starts operating using technology strikingly similar to the Automator's, Superman and Robin investigate and discover that Golden Gloves isn't the Automator, but a brainwashed Batman, who was actually teleported away ten years ago by the Automator, whom they finally bring to justice.

An imaginary story. Page 9 is a 2/3 page and page 16 is a half-page. Drew Moore credit from the artist.

6 The Corpse That Wouldn't Die (Batman and the Atom) Comic story, 20 pages

When Batman is electrocuted and declared brain dead while on the trail of the kidnapped Debbie Manton, the Atom must enter the detective's brain and reactivate it to finish the case and in doing so restores the Batman's brain to normal functioning.

7 Where Were You on the Night Batman Was Killed?: The Testimony of the Catwoman! (Batman) Comic story, 17 pages

When word spreads throughout the underworld that Batman has been killed, several villains take credit for the deed. So the villain community sets up a trial to test the various claims, with Ra's al Ghul acting as judge and Two-Face acting as prosecutor. First up is the Catwoman. But Two-Face finds the technical error in Catwoman's story and she is dismissed.

Batman is not revealed to be acting as Two-Face until the fourth part of the story. It is unclear whether Tweedle Dee or Tweedle Dum is the character shown in the gallery. Drew Moore credit from the artist.

8 Where Were You on the Night Batman Was Killed?: The Testimony of the Riddler! (Batman) Comic story, 17 pages

It is the Riddler's turn to provide testimony in the murder of the Batman, but the prosecutor Two-Face finds the flaw in the Riddler's testimony, and he is also dismissed.

9 [Where Were You on the Night Batman Was Killed?:] The Testimony of Luthor! (Batman) Comic story, 17 pages

Lex Luthor's claim to have killed the Batman is refuted by surprise witness Superman, who convinces the jury that Luthor did not kill Batman, as he thought.

10 [Where Were You on the Night Batman Was Killed?:] The Testimony of the Joker! (Batman) Comic story, 17 pages

The Joker testifies to the circumstances whereby he killed Batman, but when Two-Face demands that the Joker produce the photographic evidence he claims to have, a recess is called. After Two-Face leaves the court, he removes his disguise, revealing the Batman beneath. Having identified the real murderer, Batman confronts the Joker and sends him back to Arkham. Later, Batman confers with Commissioner Gordon and discusses how it was really Batman-admirer Jerry Randall in a Batman costume that the Joker had killed and how the trial was a ruse to discover who among the many claimants was actually responsible.

Superman and Robin are wondering where Batman is when Ed Wiley, wearing a shirt covered in TNT and standing on the top of Metropolis Bridge, announces he has captured Batman and demands ten million dollars ransom. After Wiley blows himself up, partially catching Robin in the blast, it is up to Superman to interpret Wiley's last words and find Batman, but the escape artist has already freed himself from being buried alive.

Ra's al Ghul orders Talia to kill the Batman, but her love for the detective trumps her loyalty to her father.

Catwoman dreams of what married life with Batman would be like.

14 Rest in Peace Promo (ad from the publisher), 1 page

The illustration behind the title is a panel from Nightwing (DC, 1996 series) #52.