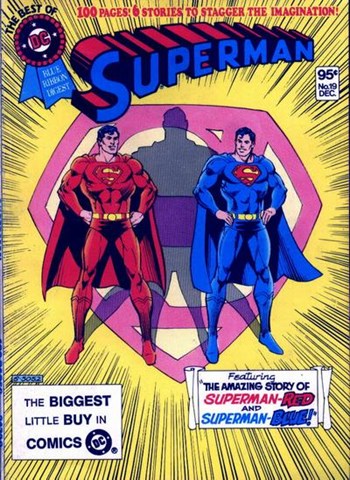 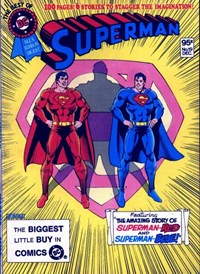 2 The Titanic Twins! (Part I of "The Amazing Story of Superman-Red and Superman-Blue!") (Superman) Comic story, 8 pages

4 The End of Superman's Career! (Part III of "The Amazing Story of Superman-Red and Superman-Blue") (Superman) Comic story, 8 pages

Lois marries Clark Kent and then gets depressed because she can't tell anybody he's really Superman.

What if Baby Kal-El landed on Earth in 1976? Found by the American military just ahead of the Soviets, Kal-El is raised as a ward of the Army. Tensions over the alien superhuman, now called Skyboy, boil over in 1990 with both the U.S. and the U.S.S.R. launching missiles. Skyboy destroys all of the weapons and abandons his Skyboy identity to live as Clark Kent. In 2001, the Soviets send Moka to Times Square to declare himself the person who saved the planet in 1990 and the rightful ruler of mankind, but Clark comes out of retirement, this time as Superman, and exposes Moka for the fraud he is.

Inside back cover. Promo for new version of Wonder Woman by Roy Thomas, Gene Colan, and Romeo Tanghal. Penciled page from preview in DC Presents #41 is shown.