Strange Tales of the Wild West 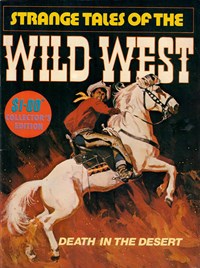 When Karl and Nancy's car breaks down in the desert, they seek help and accommodation from John Nobody until the next coach comes in a week's time. But John is afraid of more and more people coming. He is psychotic and is soon alone again. Gringo is called to Tombstone by the Sheriff, who has arrested Hugh, a robber, but not the murderous gang leader, Dexter Kelvin. Hugh escapes, but Syd discovers he's headed to Terence Valley where Dexter is posing as Mr Lynn, the owner of the Hotel Arizona. When Syd avoids an ambush, Dexter sets fire to his own hotel in an attempt to escape, while also framing Pete, the Chinaman, who owns the rival Hotel Frontera. Syd has the town's horses rounded up and guards exits on foot. Dexter dies when he goes over a cliff and Gringo takes Hugh back to jail.

The signature on this story is dated 1965. Jarvis Garret asks Gringo to persuade local Mexicans to build a needed dam in the haunted 'Hill of Death'. Tomás and Chucho respond, but an old woman lures them to an Aztec temple with fire blasting from an idol's eyes. They run in terror. Syd helps dig the dam to show it is safe, but a rock slide badly hurts Javis. The villagers believe the spirits have taken revenge and the sheriff says he's not paid to fight ghosts. Gringo insists Tomás guide him to the cave, where they uncovers a fake god and find the hill rich with gold. The sheriff is behind the deception.

The signature on this story is dated 1965. 4 The Dealers from the Pecos (Gringo) Comic story, 20 pages

Gringo guards a wagon train through Apache territory. Luis' daughter Helen sees Indians, so Syd investigates. He discovers Matt and Ernest, two of his group, trading guns with Indians, but is seen and knocked out. The men and Indians flee and Helen toes missing--she has hidden in their wagon. Syd follows with Willis and Luis and uncovers gun trafficking. Syd swaps the guns for rocks. The Indians believe they've been cheated and chase Matt and Ernest. Syd goes to his friend Invincible Eagle and set a trap for everyone involved in the scheme that risked a war.

The signature on this story is dated 1965. The Belgian printing might not be the first printing of this Spanish story "Los traficantes del Pecos", but it is the earliest identified to date. The Dutch story title translates as "Weapons for Indians". 5 The Gold Rush (The History of the West) Comic story, 2 pages

Feature
The History of the West
Genre
Non-Fiction

Gold was discovered at Sutter's Hill in California on 24 January 1848 and news spread quickly to New York by June, starting a widespread gold rush. Gold was later found in other states, creating important towns that were later abandoned as the mines became exhausted. 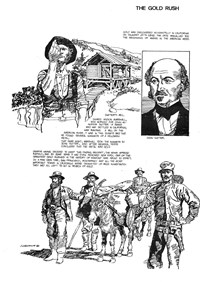 6 The Mohave Rose (The Chronicles of the Nameless) Comic story, 13 pages

The Nameless enters Hepzibah, a sex worker at Mohave Rose, on the border of the desert. Hepzibah seduces Lem and Moe into robbing the Mohave Rose and escaping with her. The arrive in a town where a strike has stopped railway construction. Mr Richards offers $5,000 for the death of the strike leader, Schuyler. Hepzibah tries to get Lem and Moe to kill Schuyler, but they know him and refuse. Hepzibah secretly reports Lem and Moe to the Sheriff, forcing the three to travel on to escape. She continues to seduce the two outlaws.

The signature on this story is dated 1974. This is an episode of "The Chronicles of the Nameless", closely translated from the original. A rewritten version of “Chroniques de l’innomé: La rose du Mohave” was also published in Vampirella (Warren, 1969 series) #47 (December 1975).