Superman: Tales from the Phantom Zone 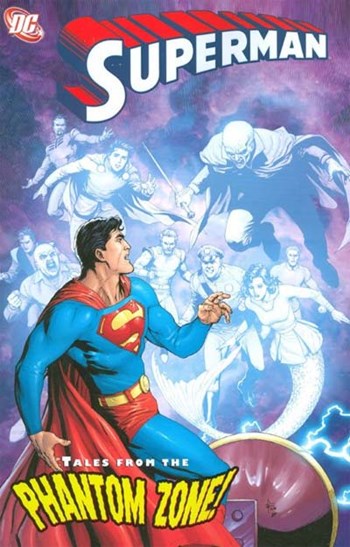 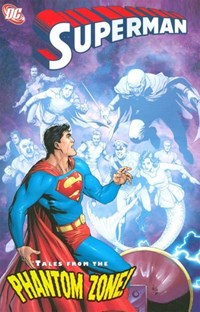 Frontispiece. The illustration is a detail from the story from Superman's Pal, Jimmy Olsen (DC, 1954 series) #62.

After Professor Lang finds a box of Kryptonian weapons, Superboy is accidentally projected into the Phantom Zone, the place where Kryptonian criminals were exiled. But using mental telepathy he activates an electric typewriter and tells Pa Kent how to free him.

When a space ship crashes outside Smallville, Superboy finds an amnesiac super-powered youth who might be his older brother. He christens him Mon-El and sets him up with a secret identity, but he soon finds evidence that Mon-El is not in fact Kryptonian.

Trying to prove Mon-El isn't actually Kryptonian, Superboy accidentally exposes him to lead, which both poisons him and returns his memory. He remembers that he is a space explorer from Daxam named Lar Gand, who visited Krypton, meeting Jor-El and Lara, before arriving on Earth. To save his life, Superboy sends Lar Gand into the Phantom Zone until he can cure him of his lead poisoning.

After Superman gives Lois and Lana brooches made of space metals, Lana sends Lois and Lori Lemaris into the Phantom Zone. But Superman realizes Lana is acting out of character and figures that the brooch must be responsible, destroys it, and frees Lois and Lori.

When Jimmy becomes Elastic Lad again he uses his powers to enter the Phantom Zone where he has an opportunity to discover Superman's secret identity.

9 The Face Behind the Lead Mask! (Tales of the Legion of Super-Heroes) Comic story, 11.67 pages

At a regular meeting of the Legion of Super-Heroes, the Legionnaires lose control of their powers. Urthlo arrives and announces that he now controls the Legionnaires' powers and there is nothing they can do about it. But Saturn Girl comes up with a serum to temporarily cure Mon-El and immunize him against lead, and Superboy releases him from the Phantom Zone to knock out Urthlo, who turns out to be an automaton created by Lex Luthor sent into the future to destroy the Legion.

Superman releases Quex-Ul from the Phantom Zone since he has served his sentence, but Quex-Ul vows revenge on the son of the man who pronounced him guilty. However, when the freed prisoner displays heroic behavior, Superman wonders if Quex-Ul was truly guilty and travels back in time to Krypton to witness Quex-Ul being hypnotized into believing himself guilty. When Supergirl tells Quex-Ul he is innocent, he sacrifices himself to keep Superman from being exposed to the Gold Kryptonite trap he has set for him. In doing so, Quex-Ul loses his powers and his memory, so Superman sets him up in a new life in Metropolis.

11 The Untold Story of the Phantom Zone! Part I: The Crimes of Krypton's Master Villains! (Superboy) Comic story, 13 pages

Jor-El invents the Phantom Zone Projector as a more humane way to punish criminals than sending them into space and successfully submits it into a Science Council competition. The disgruntled loser of the competition, Gra-Mo, takes over Krypton's robots to take his revenge, and ironically becomes the last criminal to be punished in the old way. Months later, after many convicts have been sent into the Phantom Zone, the prisoners try to take over Jor-El's mind with mental telepathy, so he blasts the Zone Projector into space with other forbidden weapons.

12 [The Untold Story of the Phantom Zone!] Part II: The Kid Who Knocked Out Superboy! (Superboy) Comic story, 13 pages

Gra-Mo and his accomplices land on Earth and, with the help of Jax-Ur in the Phantom Zone, plot to destroy the son of Jor-El. Using a robot, they try to convince Superboy that he has broken his vow against taking a life, but Superboy sees through their ruse and banishes them to the Phantom Zone.

13 The Man from the Phantom Zone! (Superman) Comic story, 13 pages

Superman releases Ak-Var from the Phantom Zone since he has served his sentence for an attempted theft of a Kryptonian relic. Before sending him back to Kandor, Superman allows Ak-Var to explore Earth. In Kandor, Ak-Var greets his three old friends and unpunished accomplices in the relic heist, Vas-Quor, Brenn-Bir, and Kyl-Ibo. Later, these three demonstrate super-abilities as they rob a Kandorian museum, and the authorities think Ak-Var must be to blame. After framing him, Ak-Var's friends arrange a mock trial. But Superman, who has been monitoring the situation, intervenes and with Ak-Var's help exposes the frauds. Ak-Var explains that he accidentally gave his friends super-powers due to his exposure to a piece of Red Kryptonite he had picked up on his tour of Earth.

Superman meets Black Zero, an agent of an interstellar pirate empire, who is sent out to destroy planets as they begin to achieve space travel. After learning that Black Zero was ultimately responsible for the destruction of Krypton, Superman releases Jax-Ur from the Phantom Zone to help him protect Earth and defeat Black Zero.

From GCD
from Who's Who: The Definitive Directory of the DC Universe (DC, 1985 series) #18

16 Crossing Over Promo (ad from the publisher), 1 page