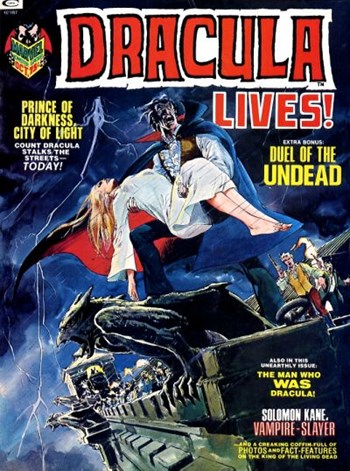 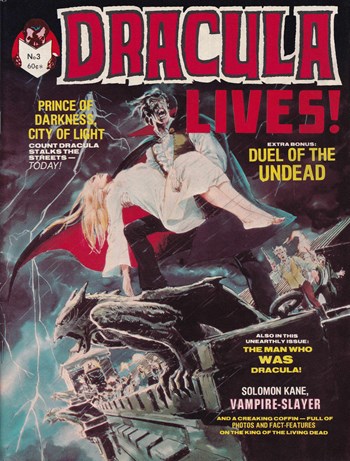 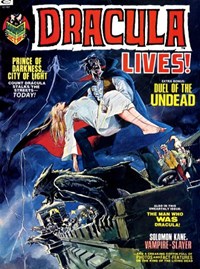 "The legions of the undead are many."

Still from a horror movie.

Dracula has just been resurrected as a vampire and is brought before Nimrod, the king of vampires. Dracula refuses to swear allegiance, so Nimrod challenges him to a duel of wooden poles. Nimrod's mistress Lala tries to seduce Dracula, but he rejects her. During the duel, Lala tries to interfere and kill Dracula, but she is impaled herself and dies. Dracula kills Nimrod and claims the vampire throne.

This story postulates the Jack the Ripper killings were done by a hateful hunchback who wanted to become a vampire so he could kill mortals, but was repulsed by the sight of blood, so vampires killed him when he could not fulfill their condition that he partake of human blood before new year's eve.

The Puritan adventurer Solomon Kane is searching for the lost Rosella Carson in Transylvania. He is attacked by bandits and is then saved from a pack of wolves by Count Dracula. Kane accepts the Count's invitation and recuperates in his castle. During the night, he is attacked by a mysterious girl, who turns out to be Rosella transformed into a vampire. Kane kills her and then turns to Count Dracula. He defeats the Count in a duel, but bound by his honor, Kane is forced to spare Dracula's life when the vampire calls in a favor for saving him from the wolves earlier.

A text story illustrated with 12 photos from the Hammer vampire movies.

The Scottish nobleman Macbeth is told by three witches that he will be king one day, and his ambition turns him to murder and tyranny.

A comic adaptation of Macbeth with the additional detail that MacDuff is the son of one of the witches.

Still from a Dracula movie.

Dracula arrives in Paris, only to be attacked by Helene Dubois, who seeks revenge in the name of her 18th century ancestor, sculptor Jacques Dubois, who allied himself with the magician Cagliostro and tried to kill Dracula with a stone gargoyle. Dracula condemned Jacques to eternal life as a statue. Now, Jacques awakens and tries to kill Dracula again, but he only finds eternal rest as he is splintered into pieces during their final battle. 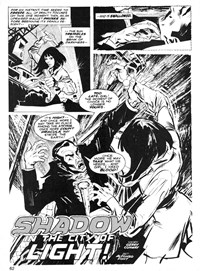 Half of the page features biographical information on Stan Lee and the other half is a review of the book "Dracula Returns!".