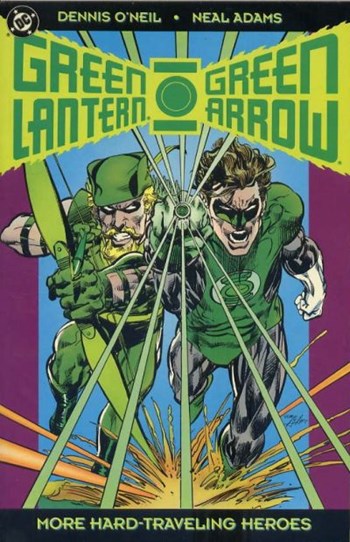 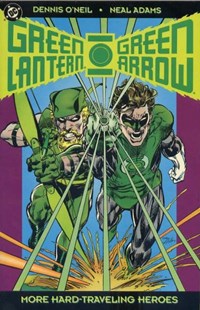 While Carol Ferris is in Piper's Dell, the sea wall protecting the town begins to give way, so Hal responds as Green Lantern. After saving the town, GL is given a tour of the plastic factory. Weakened by gas emitted by the plastic pins produced there, he is unable to fight back, so he sends his ring to Green Arrow. When he revives, he finds that his old enemy Black Hand uses the pins to keep the community under his control. He sends GL and Carol out into the streets to face the wrath of the townspeople, but Green Arrow arrives in time with GL’s ring, and GL traps Black Hand in his own plastic.

When Oliver is jumped by junkies, he is shocked when one of them shoots him with one of his own arrows. Green Arrow, now teamed with Green Lantern, follows the leads to find the junkies, including the missing Roy Harper, who lets GA assume he has been working undercover. Later, the junkies lead the heroes to an airplane hangar, but help the dealers knock out GL and GA and inject them with drugs. Roy arrives in time to get the messed up duo home. There he tries to explain the attraction of doing drugs, but Green Arrow remains baffled, and is shocked to soon find Roy getting ready to shoot up.

Having discovered that Roy is a junkie, Green Arrow sets out to bring the drug traffickers down. Green Lantern returns to Oliver's building and finds Roy curled up in the basement. He takes Roy to Dinah's to straighten out and heads out to find Green Arrow, who has been knocked out by the drug dealers and tossed into the harbor to drown. GA escapes just as GL arrives to take out the goons who threw him into the water. Together the two trace the drugs to pharmaceutical magnate Salomon Hooper and put him out of business. But Roy explains that drugs are not the root problem, just a symptom of it.

When Guy Gardner is injured, the Guardians of the Universe instruct Hal Jordan to train another back-up, but John Stewart has different ideas about how to be a Lantern. When an attempt is seemingly made on the life of racist politician Jeremiah Clutcher, John Stewart figures out that the attack was faked and part of a cynical plot to get Clutcher elected president.

After Green Arrow witnesses the death of a young boy in a riot, he decides that he might be able to do more for his city as its mayor.

Green Arrow goes with Green Lantern and Carol Ferris to the Ferris Aircraft plant in Abraham, which has been the target of ecological prankster Isaac. When Isaac accidentally threatens Carol, GL tries to take him into custody, but GA gases him. Offended at this abuse of the atmosphere, Isaac turns his back on Green Arrow. Ferris security subdues GA and gathers the passed out GL. Finding Isaac has lashed himself to an aircraft engine, Ferris security straps GL and GA to the tail wings of two planes and leaves Isaac where he is to die. GA frees himself, but not in time to save Isaac.

During an attack, Green Arrow accidentally kills one of his assailants. After he calls Dinah to say good-bye forever, Dinah summons Green Lantern, who finds the same thugs who attacked GA have now planted a bomb in his building.

Series continues from Green Lantern (DC, 1960 series) #89. Colorist credit from 2004 collected edition. Labeled "Chapter 1" on the title page, though the following installments of the series are not labeled chapters. Credits for script, pencils and inks confirmed from Julius Schwartz's editorial records, provided by DC Comics (April 2007).

When Black Canary is hit by a car and desperately needs a transfusion, Green Lantern's search for Green Arrow becomes even more urgent. A report on the wreckage of the Arrow-Plane leads Green Lantern to Green Arrow, but also to a scavenger, who nearly kills Green Lantern before Green Arrow can grab his bow and remember who he really is.

Bannered as a "Green Lantern and Green Arrow" feature on the splash page. Credits for script, pencils and inks confirmed from Julius Schwartz's editorial records, provided by DC Comics (April 2007).