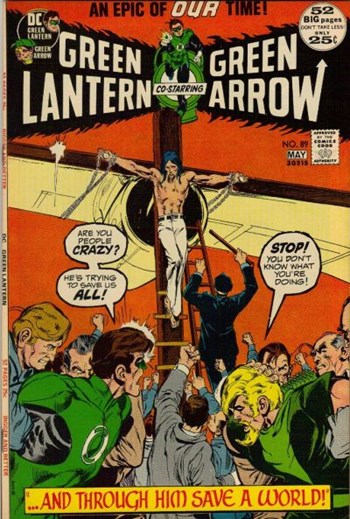 Cover ...And through Him Save a World! (Green Lantern Co-Starring Green Arrow) Cover, 1 page 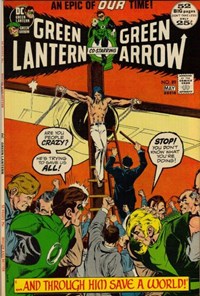 1 ...And through Him Save a World... (Green Lantern Co-Starring Green Arrow) Comic story, 25 pages

Green Arrow accompanies Green Lantern and Carol Ferris to the Ferris Aircraft plant in Abraham, which has been the target of ecological prankster Isaac. When Isaac accidentally threatens Carol Ferris' life, GL tries to take him into custody, but GA hits him with knock-out gas. Offended at this abuse of the atmosphere, Isaac turns his back on Green Arrow. Ferris security subdues GA and gathers the passed out GL, but when they return to Ferris they find that Isaac has lashed himself to an aircraft engine to try to stop Ferris' pollution of the atmosphere. Ferris security straps GL and GA to the tail wings of two planes and leaves Isaac where he is to die. GA frees himself, but not in time to save Isaac.