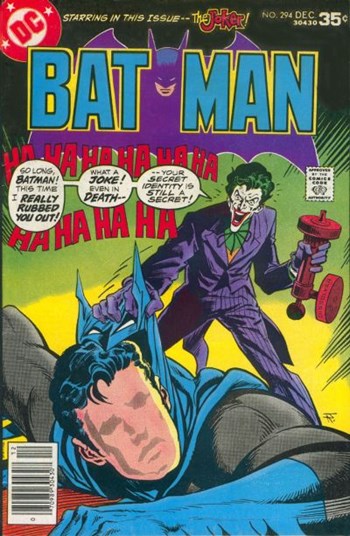 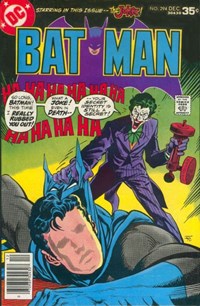 The Penguin controls some cuckoo clocks and has them stealing money, but the police entice the clocks to stop using Hostess Fruit Pies, and they capture The Penguin.

2 [Where Were You on the Night Batman Was Killed?:] The Testimony of the Joker! (Batman) Comic story, 17 pages

The Joker testifies to the circumstances whereby he killed Batman, but when Two-Face demands that the Joker produce the photographic evidence he claims to have, a recess is called. After Two-Face leaves the court, he removes his disguise, revealing the Batman beneath. Having identified the real murderer, Batman confronts the Joker and sends him back to Arkham. Later, Batman confers with Commissioner Gordon and discusses how it was really Batman-admirer Jerry Randall in a Batman costume that the Joker had killed and how the trial was a ruse to discover who among the many claimants was actually responsible.