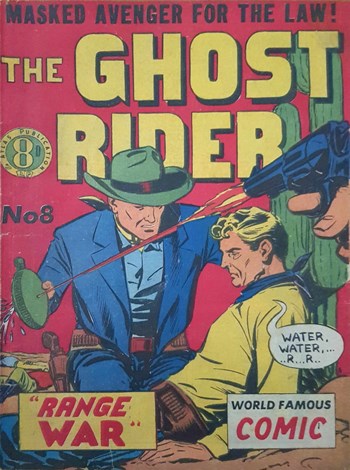 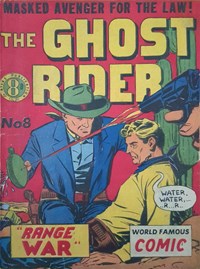 "In the wake of the civil war a great wave of lawlessness sweeps the south-west."

Heading to Red Butte, Steve Jarrett sees buzzards circling and finds four men dead. Sole survivor Tom accuses Jefford's Bar.Z outfit, which has been terrorising local ranchers. The Ghost Rider investigates and finds Bob Prentiss has sought revenge and been captured by Jefford. Ghost Rider rescues Prentiss, which inspires the townsfolk to attack Jefford, who hires a famous gunman from Lincoln County, Billy the Kid, to kill Ghost Rider. The townsfolk beat Jefford's gang while Ghost Rider humiliates Billy the Kid and sends him on his way "to be shot dead, shortly afterwards, by Sheriff Pat Garrett at Fort Sumner".

Includes six text reports, five of which are titled: War in Wyoming, The Real McCoy, Hand of the Master, Hard to Raise, and One Not Enough. This is only the first page of what was originally a two-page feature.

Includes six text reports, five of which are titled: Dead Man's Hand, Hold your Hosses, Mark of Cain, The Camel Trail, and Gone to the Dogs. The first (untitled) is about Annie Oakley. This is only the first page of what was originally a two-page feature. 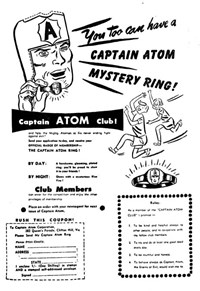