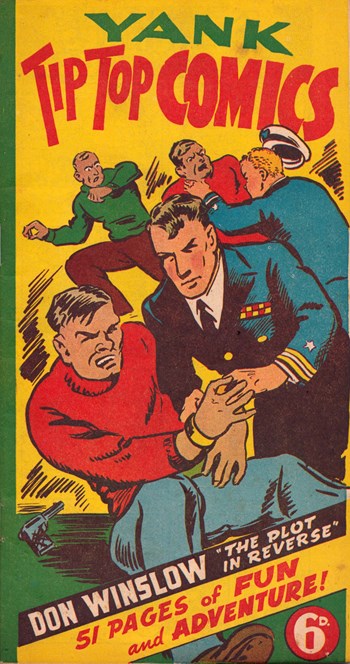 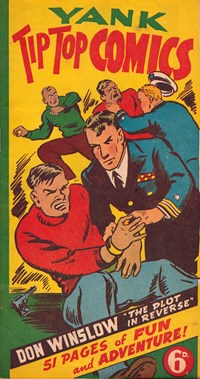 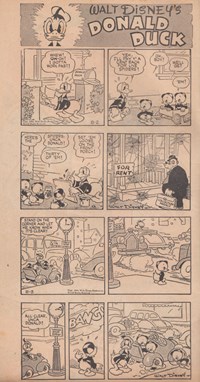 "Stand on the corner and let me know when it's clear!"

3 The Plot in Reverse (Don Winslow of the Navy) Comic story, 11 pages

Radio man Remus Reggirt has been sending secret messages to the underworld in his broadcasts, so Don sets a trap in his own broadcast using Arlie to impersonate Reggirt's voice. Meanwhile, Buzz Grant is left out of the big raid on the waterfront, but gets a surprise visit from Lieutenant Pennington. When FBI Officer Cronin identifies Reggirt as convicted spy and arms smuggler "The Trigger", Reggirt hangs himself. 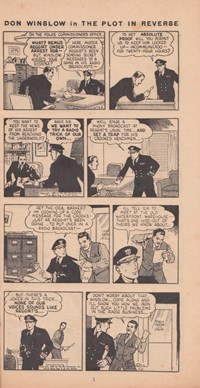 4 The Glitter Girl (Freckles and His Friends) Comic story, 16 pages

Mary and Henry misunderstand an overheard conversation and believe Freckles is marrying June, but she's just bridesmaid for Helena Morse and Joe Crill. The wedding planning makes Freckles and June romantic and gets their parents worried. Then the recently-arrived Sylvia grabs Freckle's attention all the way to the wedding. As they return from the wedding, the worst storm in fifty years causes Sylvia to panic, while June's dependability gets Freckle's attention again.

Two daily strips are printed on each page in four tiers. While most strips have no date codes, the dates 4-9 and 4-15 are included in the middle. The Feature name is not given on this printing. 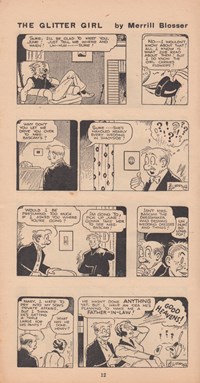 5 Pop Gets Home (Boots and Her Buddies) Comic story, 18 pages

"By Gar, that Monsieur High --- He is sure one excited man, all right."

After Pug's father dies, the Duquesnes become her guardian, but Pierre treats her badly. She runs away and gains the support of Boot's family until her father is discovered alive. The Duquesnes have forged a will to gain Pug's inheritance and they make their escape. But Mr High has been found alive and returns. When Mr High must return to work, the Tutts agree for Pug to stay with them to go to school.

Date codes begin at 8-21 and continue to 9-29 in the second last strip. This is the final part of the storyline that introduced Pug, starting in 1937. 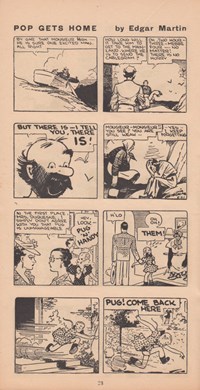 "If you're hitchin' a ride, I think you're in the wrong place, buddy!"

Donald knocks over the fishbowl in the waiting room.

"Yeh, send out a salesman! I want a demonstration!" 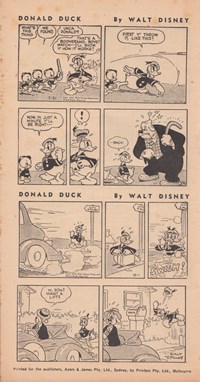 "Bet I get to Homeville ahead of ya!"

"Unca Donald, did George Washington get licked for cutting down the cherry tree?"

This comic is the back cover and has the date codes 11-18. 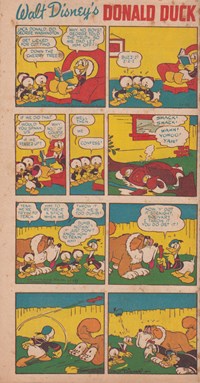 "Yeah, we're trying to teach him to retrieve a stick when we throw it, but he's too dumb!"

This comic is the back cover and has the date codes 11-19.