El Lobo the Man from Nowhere #5 Cover Wolf to the Rescue (El Lobo the Man from Nowhere) Cover, 1 page "Along the Rio Grande, the river that borders the south-west territories and Mexico, superstitious indians have described a tall, mysterious stranger…" 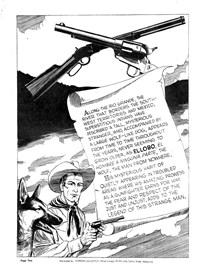 "It is early afternoon as El Lobo, with 'wolf' sitting up behind him on the big chestnut stallion to protect his pads from the burning desert sand, head towards the distant foothills of the Sierra Madre Plateau."

El Lobo returns to the comatose Lil and awakens her. She decides to stay with the Madretos as El Lobo heads to Arizona. Near Silver Gulch El Lobo is ambushed and captured by a gang blockading the mine to do a major silver ore theft. Meanwhile, the town's miners are beginning to arm themselves to take on the raiders' blockade, following the pacifist mine owner's death. A massacre is brewing, unless El Lobo can get free and stop the raiders' mysterious masked boss. 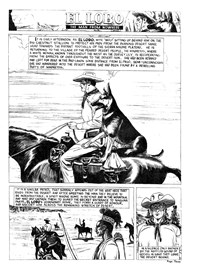 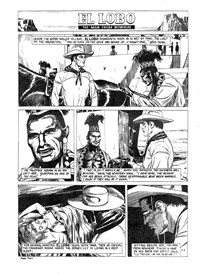 3 Clancy of the Overflow Promo (ad from the publisher), 1 page 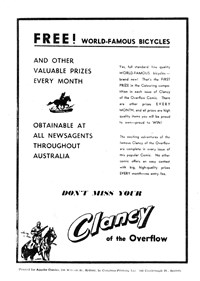