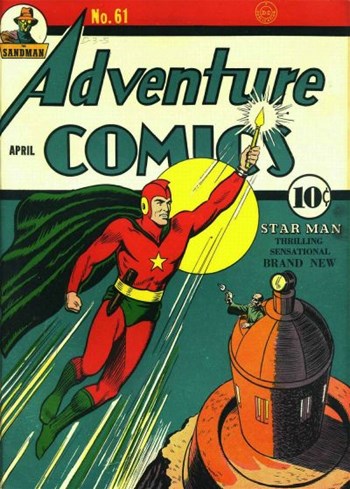 Starman does not have a circle around the star on his chest, although it appears in the story art. 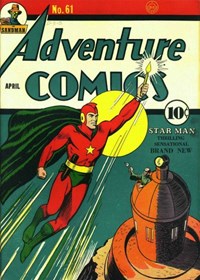 Starman is called in to battle the "Secret Brotherhood of the Electron", which is sabotaging America's communication and light system.

Jack Burnley recalls someone other than Fox doing the first story, but the writing style does look like Fox's. Burnley does state that he re-wrote the last part of this story, introducing a villain that he called Dr. Doom, but whom the editors changed to Dr. Doog. If one looks, for example, at the lettering in the balloon on page 6, panel 3, you can see the lettering of "Dr. Doog" looks totally different, and was obviously re-lettered. Burnley has at different times recalled his letterer as his sister Betty Bentley and the backgrounds done by his brother Ray. The cover for this issue reappears as the last panel in the Starman story in Adventure #63. Information here related to Craig Delich by Burnley at his home in Charlottesville, Virgina in 1989.

"For thrills and adventure..."

King Talon hopes to save Mark from being tortured and to save Kit before ending Costa's evil reign.

Writer credit verified by Jerry Bails. The end panel of this story is a promo for the Spectre strip appearing in More Fun Comics.

Two fact quickies are featured: that approximately 100 million chickens are produced and marketed in the U.S. each year, AND that it takes more than one million tons of coal a day to supply this nation's demand for heat, light and power.

Steve Carson of the FBI is called in to deal with the loss of five border policemen engaged by the Border Business Association to prevent gun running across the border.

Steve begins to investigate the situation when his old pal Sparky is spouting off about a fabulous treasure he has uncovered, and then is murdered.

When Peter and his pup go fishing and have no luck, the dog figures out a better way to do the fishing.

The Hourman, blamed for stealing animated mechanical prehistoric beasts from a museum, finds he has to battle them in order to save Thorndyke from kidnappers.

Letterer credit added by Craig Delich. Writer credit verified by Martin O'Hearn. The last panel of the story is an illustrated ad for The Spectre by Jerry Siegel, starring in More Fun Comics. The villain, Mr. Whistle, is called Mr. Whistler in the last half of the story.

A noted banker fakes his death in order to abscond with bank funds and place the blame on other employees.

A few small ads on the book review page.

Cotton saves Deela from being kidnapped by Orko, then they find themselves stranded in the ancient city of Dorgo, armed only with the Ring Machine to fight off another onslaught by Orko.

Jimmy Owen, a private detective from the Quick Service Agency, is hired to protect the life of a cat, which is the recipient of $250,000 from her deceased owner.

19 Superman Is on the Radio (Superman) Advertisement, 0.5 pages

Advertisement for the Superman radio program.

20 The Menace of the Metal Gun! (The Sandman) Comic story, 10 pages

Sandman must battle a scientist, in the pay of a foreign government, who has invented a mysterious Cylindecraft, whose purple ray can eat its way through metal.

Sandman uses his new Wirepoon in this story. The Millennium edition lists the writer as Gardner F. Fox.

"Ellsworth, although the only one credited as editor, is more an editor-in-chief -- with Mort Weisinger and Jack Schiff the actual editors starting a few years into the 40's; many stories throughout the 40's probably colored by Raymond Perry."