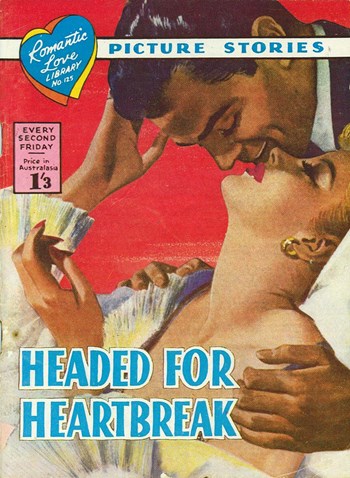 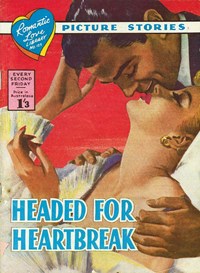 Warren Peters was a fireman by day, but that night he and Mary danced at the Senior prom and planned their future. Returning home, Mary was on cloud-9 until her mother rushed in to say that the house across the street was burning. Mary ran outside and overheard someone say that a fireman was trapped; all of her thoughts raced to Warren, worried that it was him. The next time she saw Warren, he begged him to quit his job as a fireman and when he refused she broke it off until she realized everyone lives with danger, and it is love she can't live without.

"When a wife in the Teso tribe misbehaves her husband has the right to beat her!"

This story might also be from a different Harvey series as the feature ran in several series.

Ellen had just started going to Baldwin Junior College, but her relationship with Tim had gotten serious. At the dormitory, she was introduced to Karen Marshek a beautiful exchange student from Switzerland. When Tim came over for their date, Ellen introduced her to Karen. But, when Tim offered to help Karen study American government, she had a bad feeling. Soon Tim came around less and less, until on a stroll Ellen saw Tim take Karen in his arms and kiss her. Her jealousy took over, and she told Tim that the only reason Karen was interested in him was to marry him and get American citizenship. Furious, Tim broke it off with Karen. Soon, at an assembly, it was announced that Karen had won first prize for her essay on "The Meaning of America" but she could barely accept the award after what Ellen had done to her. So much for truth and fair play. Astonished, Karen admits that she lied about Karen. Screaming, "how could you be so cruel?" Tim ran from the auditorium to find Karen, leaving Ellen to deal with her guilt and conscience.

GCD suggests that the story in Hi-School Romance #40 is a reprint.

How to be tactful.

Stories in this issue have been reformatted for pocket size.