Superman: Past and Future 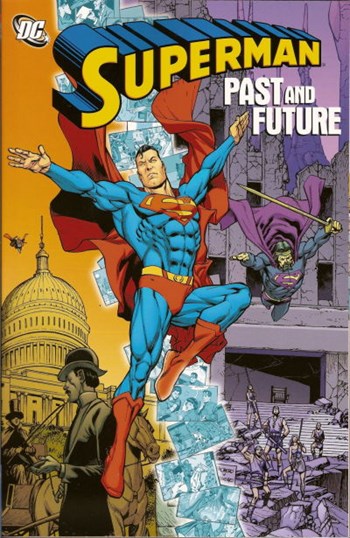 Cover credited only to Pacheco on item, but signed by Pacheco & Merino on cover and credited to the duo on the DC website. Cover includes small reproductions of panels from the stories included in the volume. 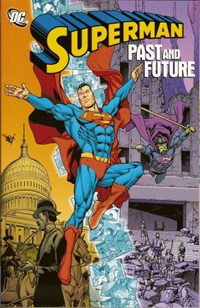 2 Superman: Past and Future Illustration, 2 pages

Superboy travels to the past to prevent the assassination of Abraham Lincoln, but runs into the adult Lex Luthor who immobilizes Superboy with red kryptonite. When Luthor realizes he has prevented Superboy from saving Lincoln, he remorsefully flees the past in his time machine.

When the Daily Planet mounts an autograph contest, Superman helps Johnny Terrill collect signatures from around the globe and across time to give him the confidence to walk again. But Johnny has to compete against a young heir and his crooked bodyguards, who actually want to collect signatures so they can later forge checks. When Lois and the heir discover the bodyguards’ plans, Superman comes to their rescue, and then supplies Johnny with the winning autograph.

After over-exerting himself, Superman falls into a coma and awakens 1,000 years in the future. There he foils the plans of renegade scientist Drago and teaches the people of the future the folly of letting machines rule over them. As thanks, they use an experimental time travel machine to send him back to his own day, where he awakens from his coma.

The story makes no logical sense, as Superman awakens from his coma after a week AND sleeps for a thousand years.

Letters credit from GCD index of the original printing.

Lois travels across space and back in time to prevent Krypton from exploding and becomes Lara’s rival for Jor-El’s affections.

In the year 2965, Klar Ken T5477 takes over the role of Superman from his father, a role passed from father to son since the original Superman 1,000 years before. Like his ancestor, Klar works in the news business, but unlike his ancestor he is immune to the effects of kryptonite, and paralyzed by seawater, which has been irradiated by a past atomic war. Assigned to track down the story on Muto, last seen on Neptune, Klar says good-bye to his co-worker and girlfriend Lyra 3916, who likes Klar, but dislikes Superman.

Superman tracks Muto to sector Z-44, where the villain springs a series of traps on the hero, finally luring him into saving a trio of android children in the path of a wave of paralyzing toxic seawater.

12 Muto Versus the Man of Tomorrow! (Superman) Comic story, 12 pages

Using his heat vision, Superman reprograms the android children so they save him from the paralyzing seawater. Later, back on Earth, Muto challenges Superman again, but Superman creates a super-electric discharge to open a space-warp to Muto’s dimension and the villain is drawn home.

13 The Danger of the Deadly Duo! (Superman and Batman and Robin) Comic story, 17 pages

When Muto teams with the Joker of 2967 to battle Superman, the last descendant of Batman takes up the cape and cowl to help Superman and get revenge against the Joker, who's father killed his father.

Story incorrectly credited to Edmond Hamilton on item. The story refers to Superboy (not Superman) recently trapping Muto in his home dimension. In this story, exposure to seawater weakens Superman like kryptonite, rather than paralyzing him as previously.

Father Time steals Superman’s costume and Superman follows it to 2975, a future unlike the future he knows, an “Earth after disaster.” There, Superman meets Jaxon, who wears his costume and the two battle until they end up back in 1975. Father Time arrives and reveals that he is a Green Lantern from the 30th century. He explains that the Time Trapper eliminated all the other possible timelines, leaving only the one in which civilization is destroyed by a Great Disaster, so he pitted Superman against Jaxon so that the energy their fight generated could restore all of the possible futures.

The Green Lanterns’ battle with the Time Trapper must have been earlier than contemporaneous Legion stories, as Duo Damsel (retired) and Invisible Kid (deceased) are shown as active members. This story was part of a larger attempt by DC to explain their two primary timelines. See Amazing World of DC Comics, The (DC, 1974 series) #12.

What if Baby Kal-El landed on Earth in 1976? Found by the American military just ahead of the Soviets, Kal-El is raised as a ward of the Army. Tensions over the alien superhuman, now called Skyboy, boil over in 1990 with both the U.S. and the U.S.S.R. launching missiles. Skyboy destroys all of the weapons and abandons his Skyboy identity to live as Clark Kent. In 2001, the Soviets send Moka to Times Square to declare himself the person who saved the planet in 1990 and the rightful ruler of mankind, but Clark comes out of retirement, this time as Superman, and exposes Moka for the fraud he is.

29th century professor Kristin Wells travels to the present to try and determine the alter ego of Superwoman, the last unrevealed secret identity. Arriving just before Superwoman makes her public debut fighting King Kosmos, Kristin suspects that Lois Lane or Supergirl wore the costume, but when they are knocked out when Kosmos arrives, Kristin herself has to go into action as Superwoman.

18 A Hero Across the Eons (Superman) Promo (ad from the publisher), 1 page