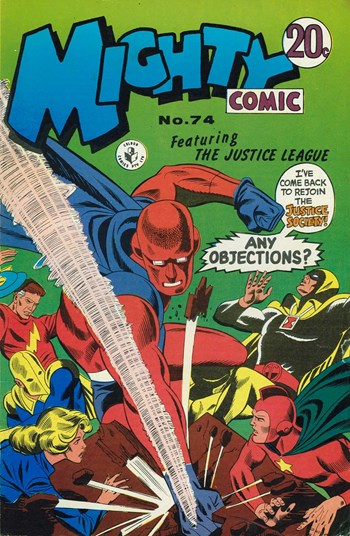 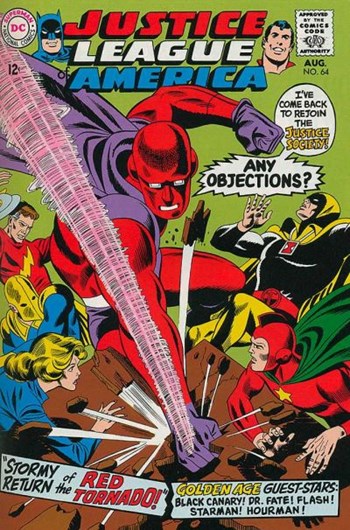 "I've come back to rejoin the Justice Society. Any objections?" 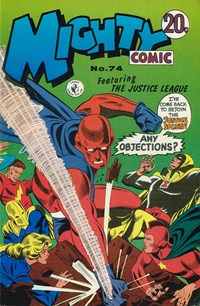 At one of the JSA's meetings, a new Red Tornado interrupts the group, claiming he is the original one, when the JSA knew the original one (Ma Hunkle), who just as suddenly as she entered in on their first meeting left. They give this new Tornado a chance to show his heroism, but every time the JSA is about to defeat a group of criminals, the Tornado interferes, casuing them to 'die' in battle. Helpless to stop this, he goes to Earth-1 to enlist the JLA's aid, since he learns it was T.O. Morrow who was behind the JSA's 'deaths'.

The words "of America" have been removed from the Justice League and Justice Society. 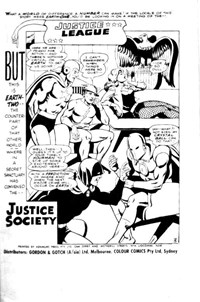 "If it's action you want--buy Superman's Supacomic. 20c. On sale everywhere."

The title in this advert was only used on the earliest 1959-1960 issues. It was quickly changed Superman Supacomic. The image is from page 20 of "The Race to the End of the Universe" in The Flash 175, December 1967 (pencils: Ross Andru, inks: Mike Esposito).

3 World's Finest Comic [The Flash] (The Flash) Promo (ad from the publisher), 0.3 pages

The source of this image is unknown.

"Thundering Excitement is yours in All Star Adventure Comic. On Sale Everywhere. 20c"

"U.S.A." has been removed from the original title. 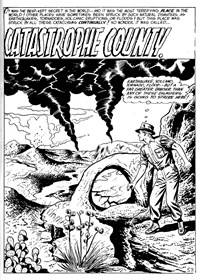