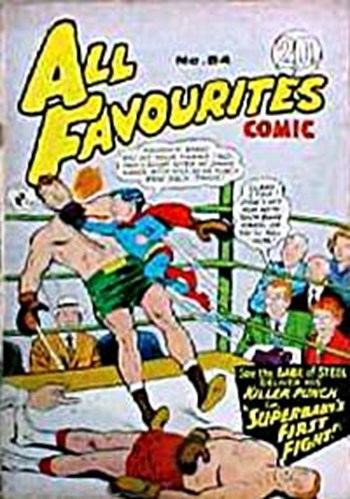 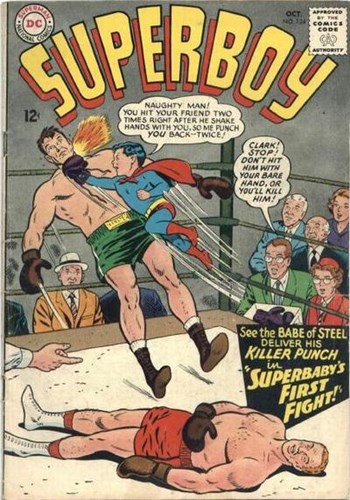 "Naughty man! You hit your friend two times right after he shake hands with you, so me punch you back--twice!" 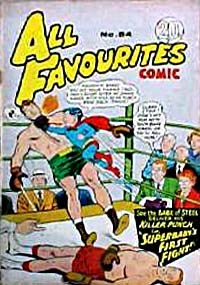 2 The Strange Schemes of the Gargoyle (Challengers of the Unknown) Comic story, 12 pages

On the rooftops, the Gargoyle broods. The Challengers rush him, as he's wanted for burglaries, but the Gargoyle escapes. He lands next to a blind woman, Laura, and an odd friendship begins. The Gargoyle needs a gang, so he snatches some prisoners, leaving two police officers in peril who the Challs must rescue. Later, after the Gargoyle promises to pay for Laura's eye operation, the Challs find him again, but again he escapes. When Laura's bandages come off, she is horrified at her evil benefactor, who tries to toss her off the hospital. The Challs save her, but the Gargoyle gets away for now.

June proposes a contest to determine the leader of the Challengers. She gives them each a gift to help them get the Gargoyle. Ace uses his hour-glass to escape from a robot pterodactyl and parachute into the castle. Underwater, Ace uses the ink of his pen to blind a minisub, but needs Ace to rescue him. Red rappels down the mountain and uses his key to grind the gears of a giant robot hand, but he's knocked out and Ace rescues him too. Rocky uses his balloon as a slingshot against a gorilla, but he too needs Ace's help. June crowns Ace the leader because he used his gift and saved the others.

"I want to see something in the way of missiles for my son!"

5 I Was the Man With Animal Powers (Animal Man) Comic story, 16 pages

An alien space ship temporarily gives Buddy Baker animal powers, which he uses to round up escaped circus animals and fight an alien creature with the same powers.

Story is told in two chapters of 8.67 and 6.67 pages. Story was not originally intended as a continuing feature: Animal Man is not named, does not appear in costume and his powers are gone at the end of the story.

Superman lets Jimmy borrow a robot suit with super-powers intended for his 21st birthday present, but then is unable to remove it. When Superman gets called away on an emergency, Jimmy uses the suit to perform heroic deeds around Metropolis.

Detective John Sutter inadvertently finds himself on a subway train from another dimension. When he disembarks, he helps the other-dimensional police solve a crime, which helps him solve a similar crime when he returns to his own world.

Teen genius Robby Reed discovers a mysterious dial that can transform him into different super-heroes when he dials the letters "H-E-R-O." He uses his newfound powers to battle the Thunderbolt Gang, but their leader, Mr. Thunder, escapes.

Origin for Robby Reed and the dial.