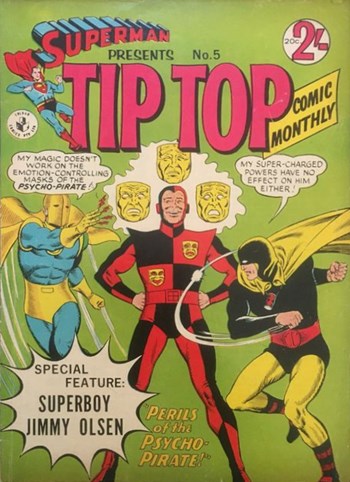 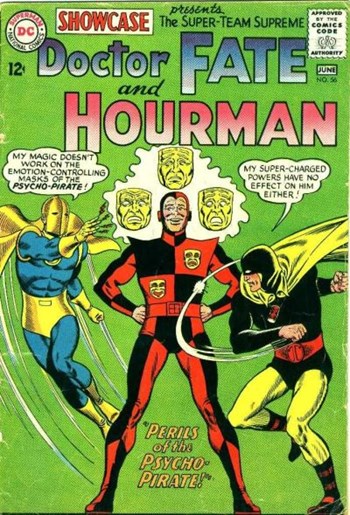 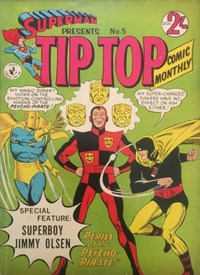 2 Superboy Meets Robin the Boy Wonder (Superboy the Adventures of Superman when he was a Boy) Comic story, 13 pages

Prof Nichols sends Robin into the past to destroy a machine that will one day kill Superman.

5 The Haunted Island (Challengers of the Unknown) Comic story, 13 pages

The Challengers enter a museum to guard a recently unearthed sarcophagus thought missing. An anonymous tip says it will be stolen, and in flies a harpy-man who grabs it! The Challs try to stop him but are brushed off. Pursuing in their jet, they reflect on recent bizarre thefts of not-extinct object such as Montezuma's Crown and a dodo. Arriving at Skull Island, they find it's a lost island recently resurfaced. The heroes find an underground lab and museum of not-extinct creatures, including the stolen artifacts and a live T-Rex and giant scorpion! A Frankenstein lookalike thumps them, and the Challengers fight back and pursue - only to be trapped and gassed. They awaken in new yellow-red uniforms with hourglass emblems for the "sands of time running out". Their costumers are a council of "oddballs": a snaky man, harpy-man, frog-man, porcupine-man, and Frankenstein-man. They were scientists mutated by radiation into freaks, so have "created their own world" of things that should be dead. Since the Challengers should be "extinct", they are invited to bathe in radiation and join the group. The heroes pass - "Give us 20 years to think about it!" - and run. The mutants release the scorpion. The Challengers steer it near the T-Rex case, and the flailing stinger shatters the glass. T-Rex and scorpion battle. The Challengers run, but are ringed by fire. If they won't mutate, they'll be displayed in suspended animation forever. Prof, oddly, freaks at the idea of "living death" and runs to the radiation machine - to mutate himself to free his friends. He's transformed into an octo-cloud, but his mind is affected and he strangles his pals. Ace dodges towards a transformer. When octo-Prof hits it, his energy is siphoned off and he reverts to normal. But the transformer blows and tears the island apart. The guys flee in their jet as all is destroyed. But they decide to keep the new uniforms, and hope the sands of the hourglass don't run out too soon.

6 The Man Who Saved a Monster Comic story, 8 pages

Jimmy decides to create his own fad.