El Lobo the Man from Nowhere

"...Atkins asked Chatto to create another character which resulted in another cowboy comic, El Lobo - The Man from nowhere. Again with a full-colour half tone cover, El Lobo first appeared late in 1956 and ran through 23 issues. The comic was also responsible for introducing the Cleveland trademark, King Size Comics" -- Ryan, John. Panel by panel. Stanmore, N.S.W. : Cassell Australia, 1979. Page 209.

King Size Comic is reported at times to be a continuation of El Lobo; however, the two series overlap issue numbers.

For further information on this series, see comicsdownunder.blogspot.com/.../...m-nowhere.html. 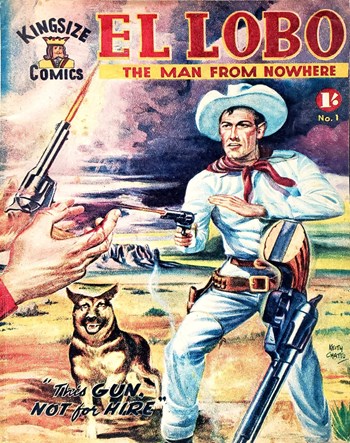