Vumps is a story paper in the UK tradition of Ally Sloper and Comic Cuts.

An advertisement in July 1908 invited "Contributions, Literary (in verse and prose) and Artistic, are invited to an Australian Comic Paper, to be published in August. Literary contributions must be brief and humorous. Good rates will be paid for all accepted matter." ['Advertising' (9 July 1908). The Express and Telegraph (Adelaide, SA: 1867-1922), p. 2. Retrieved 26 October 2017, from http://nla.gov.au/nla.news-article208826766.]

The second issue of Vumps was to have been published on 15 September, with reports that paper would become weekly due to popular demand (http://nla.gov.au/nla.news-article76817566). However, it ended abruptly after the first issue with a footnote in associated publication, The Worker, that "It closed down after but one issue but it paid every artist and contributor to the last penny. Also, it conscientiously returned unused drawings and MSS." ['To the Correspondents' (1 October 1908). The Worker (Wagga, NSW: 1892-1913), p. 19. Retrieved 26 October 2017, from http://nla.gov.au/nla.news-article145756607.]

Much later in 1921, Smith's Weekly credited the paper's introduction to Jack F. Higgins, formerly of the Worker and Labor News, who at that time was just elected to the NSW Legislative Council as a Labor MLC. The gossip piece states that Vumps had not caught the 'taste of advertisers' and that 'Higgins announced that "the infant died from strangulation as a result of swallowing all its parents' coin." ['Gossip from Here, There and Eveywhere' (29 October 1921). Smith's Weekly (Sydney, NSW: 1919-1950), p. 13. Retrieved 27 October 2017, from http://nla.gov.au/nla.news-article234267738.] Higgins wrote for Vumps, but is not elsewhere credited with a more significant role.

Another late footnote suggests a different cause for the demise of Vumps: "The Postmaster-General, however, probably scenting or resenting contemplated satire of a political savour, refused registration, and a copy of the first and only number of 'Yumps' would, perhaps, be more difficult to obtain than the code of laws originally promulgated by the immortal Minos, lord and law-giver of Crete.' As an incorrect name was used for the publication, the information might not be reliable. ['Books and Bookmen: More Memories of Dead Newspapers' (19 August 1915). The Catholic Press (Sydney, NSW: 1895-1942), p. 7. Retrieved October 27, 2017, from http://nla.gov.au/nla.news-article115205432.] 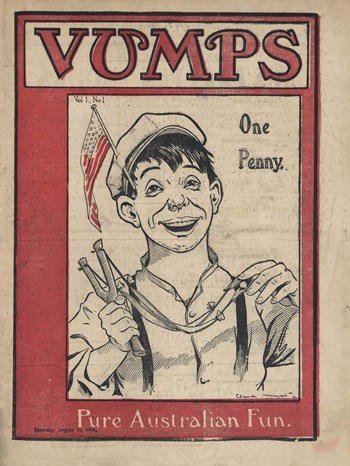